Vancouver – Vancouver Police are searching for the owner of $12,000 in dental gold recovered earlier this year during a stolen-property investigation. 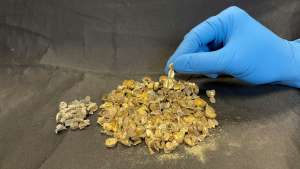 “This is a strange and puzzling case, unlike anything our investigators have seen in a long time,” says Sergeant Steve Addison, VPD. “We don’t know where this gold was taken from or who owns it, but we believe it was obtained through crime and we’re asking anyone with information to come forward.”

The dental gold – fillings, caps and bridges – was recovered in June after VPD property crime investigators learned it had been sold to a gold buyer in East Vancouver.

“Our investigators immediately seized the gold, knowing it was likely stolen,” adds Sergeant Addison. “So far, we haven’t been able to determine from where the gold was stolen, so we haven’t yet been able to make an arrest or lay charges.”

Dental gold is scrap gold that is removed from people’s mouths by dentists. VPD investigators believe the seized gold may have been taken during a break and enter to a dental office, or to the home of someone who had been collecting dental gold.

It’s possible the theft was not reported to Vancouver Police, or that it occurred in another city or province.