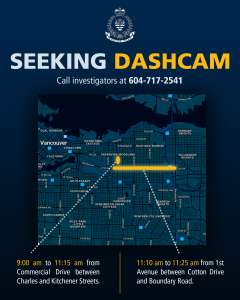 Vancouver – Vancouver Police are asking for dash-cam video to help solve an armed robbery at a Commercial Drive eatery on Sunday morning.

VPD Major Crime investigators believe the suspects who committed a takeover-style robbery at Café du Soleil likely fled in a vehicle, heading south on Commercial Drive, then east on 1st Avenue toward Burnaby.

“We’ve made significant progress in this case since Sunday, and we believe there are people who may unknowingly have dash-cam video of the suspects fleeing the area,” says Sergeant Steve Addison. “That video may contain important evidence that could help us identify the suspects and lead to an arrest.”

Investigators believe the suspects may be captured on video arriving to and fleeing from the scene via Commerical Drive and 1st Avenue between 9 a.m. and 11:25 a.m. Sunday morning.

Anyone with dash-cam video from Commercial, between Charles and Kitchener, or from 1st Avenue, between Cotton Drive and Boundary Road, is asked to call VPD’s Major Crime Section at 604-717-2541. Detectives may ask to review video to determine whether the suspects, or the car they used, were caught on camera.