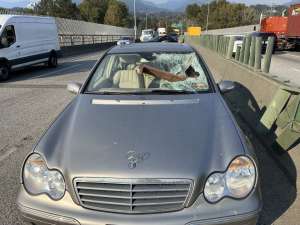 Vancouver – Vancouver Police are seeking witnesses and dash-cam video following a bizarre incident this afternoon on the Ironworkers Memorial Bridge. 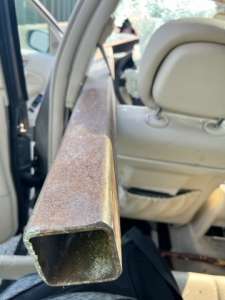 Police believe a truck heading over the bridge to North Vancouver lost part of its load around 2 p.m. today, dropping a massive metal beam onto the bridge deck. The beam bounced off the concrete, then over the median and into oncoming traffic. It then impaled the windshield of a vehicle and narrowly missed a young mom and her child.

“This was a bizarre chain of events and it’s a miracle nobody was killed or seriously injured,” says Sergeant Steve Addison. “We think the driver of the truck likely had no idea what happened, and continued on to the North Shore.”

The incident caused significant afternoon delays on the bridge.

VPD officers transported the mother and child home, and detectives from VPD’s Collision Investigation Unit are now attempting to identify the truck driver. Witnesses, or anyone with dash-cam video who was on the bridge between 1:50 and 2 p.m. today, is asked to call 604-717-3012.