“Video obtained by Vancouver Police shows a man and woman working together to commit this violent crime, which injured and traumatized two employees,” says Sergeant Steve Addison. “It’s likely these suspects live nearby or frequent the area, and we’re hoping someone who recognizes them will call police so we can begin to hold them accountable.”

VPD investigators believe the man and woman worked together to commit the robbery shortly before 4 p.m. on September 30. A woman in her 30s, wearing all black and a surgical mask to cover her face, entered the store and started browsing at clothing and accessories. She selected a purse and briefly posed in a mirror.

While staff members were distracted, a male accomplice entered the store. When the woman tried to leave without paying, the man sprayed the staff in the face, grabbed clothing off the rack, then ran out.

“Everything about this crime was pre-meditated, and we know from experience that criminals like this often strike multiple times before they get caught,” says Sergeant Addison, adding that stolen property is often re-sold for pennies on the dollar online or in the Downtown Eastside.

“Tips from the public have helped solve a number of violent assaults this year in Vancouver, and we’re again asking the public to assist.” 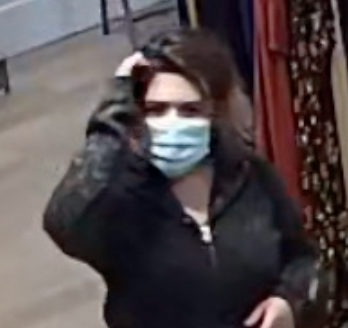 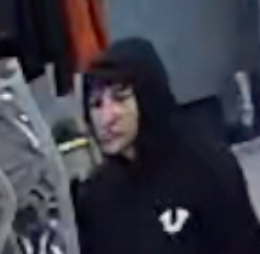