Service Dogs Killed in the Line of Duty

Eight Vancouver Police Service Dogs (PSDs) have given their lives protecting the citizens of Vancouver since the Canine Unit was first formed in 1957. Each lived with his handler and was considered a member of their family.

All are deeply missed.

In 1992, the Rotary Club of Vancouver South presented a memorial plaque to Chief Bill Marshall of the Vancouver Police Department on the 25th anniversary of the death of Police Dog Valiant, the first VPD dog killed in the line of duty. The plaque names Valiant and the other police dogs that were killed while on duty since the Canine Unit was first formed in 1957.

It is with great honour and pride that the following Vancouver Police Dogs will always be remembered: 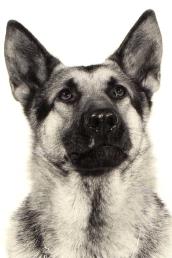 Constable Mike Wellman and Police Service Dog Valiant were dispatched to an apartment at 1460 Nelson Street to assist in the arrest of a prison escapee who had stated that he would not be taken alive.

The wanted man, Joseph McKenna, 32, was known to be armed. He had been serving a life sentence for murder after shooting a man four times in a nightclub argument.

Police received information of his location, and surrounded the apartment. Officers called for McKenna to surrender and kicked open the door. In response, two shots were fired from a bedroom, which entered a doorjamb inches from the officers. Police fired a shotgun blast into the room.

PSD Valiant was released into the room after the gunman. He was hiding under a bed, and as the dog pounced, he fired a shot causing Valiant to yelp with pain.

Constable Wellman called the dog to heel, and Valiant obediently returned to his master and sat waiting for the next command. This time, when officers called on McKenna to surrender, he complied and gave himself up. He told police the only reason he surrendered was his fear the dog would come in again.

Unbeknownst to the officers, Valiant’s thick coat was hiding a bullet wound.

As McKenna was taken out to a police car, Valiant stood guard. It was then that Constable Wellman noticed that his dog was bleeding from the stomach. He was rushed to a veterinary hospital, and had suffered a punctured a lung, liver, kidney, and intestine. Valiant died of his injuries after a three-hour operation.

Valiant was the first Vancouver Police service dog killed in the line of duty.

In 1967, The Vancouver Sun newspaper presented its “Award of Merit” posthumously to Valiant for the most outstanding dog case of the year. 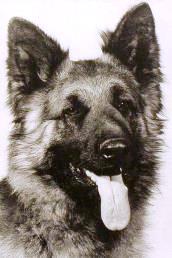 Police Dog Justin after responding to a shots-fired call. With his handler, Constable Gary Foster, nearby, Justin flushed the suspect from the bushes at E. 2nd Avenue and Garden.

The suspect left his shotgun behind and began running across the park, with PSD Justin in pursuit. He caught up to the suspect and took hold of him, who began stabbing Justin repeatedly before police officers could get to him. The suspect, Gordon Rudyk, was arrested, but not before Constable Foster also was stabbed.

Justin, mortally wounded, was rushed to a veterinary hospital. He died during surgery.

Justin was posthumously awarded the Catherine Price Gold Medal by the S.P.C.A. for his dedication to duty. He was also presented with the Vancouver Sun’s 1976 Award of Merit. 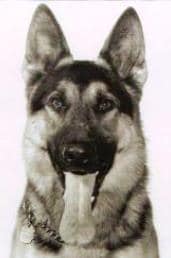 Police Service Dog Pax was killed while tracking a theft suspect. He was off-leash in a multi-level parking garage on the southeast corner of Granville and Cordova. Pax followed the suspect’s scent to the top floor of the parkade and began circling around a shed-like structure that was for the elevator.

Moments later, Pax leapt over a nearby three-foot outer wall and fell seven stories down, landing in the laneway. His handler, Constable Mike Harrower, racing down the stairs and held Pax as he took his last breath.

It was later determined that the suspect had been leaning over the same wall moments earlier, watching police arrive.

PSD Pax was the third Vancouver Police service dog to die in the line of duty since the squad was formed in 1957.

Police Dog Conan was killed while on duty with his handler, Constable Steve Gibson. They were responding to an alarm at Vancouver Technical Secondary School at 2600 E. Broadway.

Conan was off his leash, searching the east side of the school, when a cat suddenly emerged. He took off, chasing the cat northbound across E. Broadway, where he was struck by a vehicle and died. 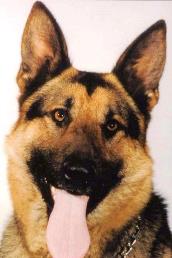 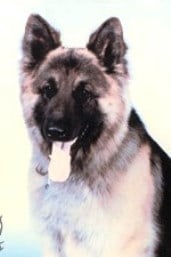 Police Service Dog Bobby was killed in the line of duty on December 1986.

While training with his handler, Constable Eric Petit, he was off his leash and searching for a quarry. He was westbound, crossing Camuson Street at W. 33 Avenue when he was suddenly struck by a vehicle southbound on Camosun.

Constable Petit loaded him into the police car and rushed to Animal Emergency, but Bobby succumbed to his injuries and died in his handler’s arms. 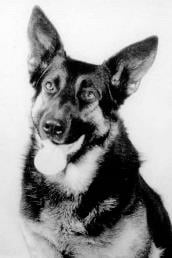 Police Dog Mecca was killed while pursuing a wanted suspect. He and his handler, Constable Mike Lynch, were westbound in the 2000 block of E. 28 Avenue, when Mecca was struck by a vehicle northbound on Victoria Drive.

Mecca was rushed to Animal Emergency, but he did not survive.

The suspect was arrested by other officers in the area. 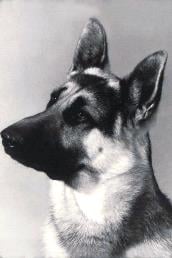 Police Dog Sabre was killed two days before Christmas 1989, while he and his handler, Constable Gord McGuinness, were responding to a break-and-enter in progress.

The police car they were travelling in was cut off by a vehicle that failed to obey the stop sign at Clark Drive and E. 3 Avenue. The police car spun out of control, striking a pole and demolishing the police car.

Although Constable McGuinness escaped with relatively minor injuries, PSD Sabre was not so lucky. He was rushed to Animal Emergency with a broken back, but he did not survive the incident. 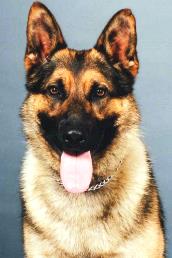 Vancouver Police Service Dog Nitro was killed in the line of duty while trying to catch a suspected car thief.

The incident began when VPD officers in an unmarked car spotted a stolen vehicle near Marine and Argyle, and followed it into New Westminster. Constable Rutter and Nitro were called to assist.

The stolen car was driven to Front Street, where the occupants realized they were being followed by police. When a train blocked their escape route, they jumped out of the car and ran.

Nitro was released and began chasing one of the men, who jumped up on the train. Nitro latched onto him, but the train began moving and he lost his grip. He was sucked under the train and died.

His death marked the end of a successful career and partnership with his handler, Constable Howard Rutter, which began in April 1999. Nitro joined the Rutter family when he was a puppy and grew up with Constable Rutter’s two children, aged eight and 12 at the time of his death. He was due to retire that June.

One of the suspects was arrested by New Westminster PD several hours later, as he hid under the wharf in the Fraser River. The suspect that Nitro had pursued was arrested a month later by VPD Constable Wong and PSD Bear.

Nitro was honoured with a full Departmental funeral.

Guardians of the Night

Trust in me my friend for I am your comrade. I will protect you with my last breath. When all others have left you and the loneliness of the night closes in, I will be at your side.

Together we will conquer all obstacles, and search out those who might wish harm to others. All I ask of you is compassion, the caring touch of your hands. It is for you that I will unselfishly give my life, and spend my nights unrested. Although our days together may be marked by the passing of the seasons, know that each day at your side is my reward.

My days are measured by the coming and going of your footsteps. I anticipate them at every opening of the door. You are the voice of caring when I am ill. The voice of authority when I’ve done wrong.

Do not chastise me unduly for I am your right arm, the sword at your side. I attempt to do only what you bid of me. I seek only to please you and remain in your favour.

Together you and I shall experience a bond only others like us will understand. When outsiders see us together their envy will be measured by their disdain.

I will quietly listen to you and pass no judgement, nor will your spoken words be repeated. I will remain ever silent, ever vigilant, and ever loyal. And when our time together is done and you move on in the world, remember me with kind thoughts and tales, for a time we were unbeatable. Nothing passed among us undetected.

If we should meet again on another street I will gladly take up your fight. I am a Police Working Dog and together we are Guardians Of The Night.